Professor Kaori Nagai contributed to development of the gypsum board industry, she won the Special Achievement Award.

At the Graduation thesis review committee for 2018

A graduate student of this laboratory made a presentation at the academic lecture meeting of the Faculty of Engineering, Nihon University.

The graduate student of this laboratory made a presentation at the academic lecture meeting of the Japan Society for Finishing Thesis 2017.

At the Japanese Architectural Association Convention in 2017

A graduate student of this laboratory made a presentation.

Thank you very much for your visiting.

Achievement name A series of studies on the application of lasers in building materials.

Associate Professor Kaori Nagai was dispatched to Aachen Technical University in Germany for one year as a long-term overseas dispatched researcher.

At the master's thesis · production presentation meeting in 2017

At the Graduation Thesis Review Board of 2017, 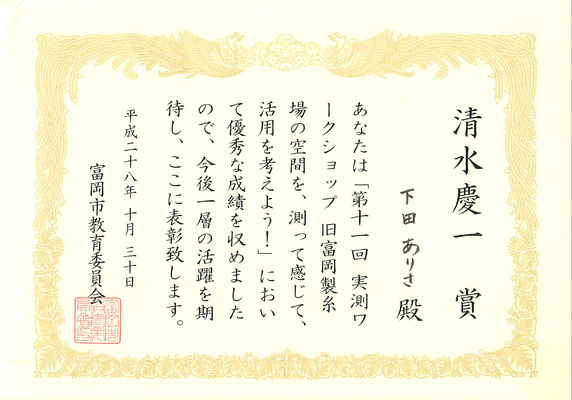 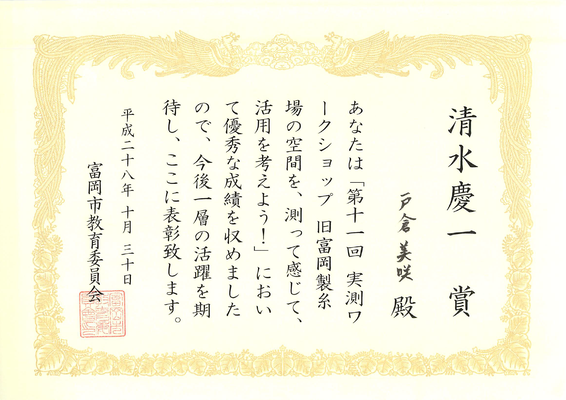 In the renovation and renewal exhibition, Prof. Kaori Nagai gave a lecture on "concept of large scale repair of super high rise apartment".

In collaboration with Watanabe Laboratory and Shinozaki Laboratory at the 21st R & R Exhibition (Building Revitalization Exhibition 2016), we exhibited at the Nihon University Production Engineering Department booth, and there were many visitors.

Associate Professor Kaori Nagai gave a lecture on "Efforts of female architects in the architectural association" as a female chairperson of the Federation of Architects at the Gender Equality Community Project (Kanto Branch of the Japanese Architectural Institute).

Arisa Shimoda of the undergraduate 4th grade at the Nihon University graduation thesis review meeting of 2016 won the cherry blossom prize in "Performance evaluation of various paint film dirt and surface degradation by outdoor exposure test". Also, Ryo Tanaka of the same grade was awarded "A Study on Maintenance and Maintenance of Historic Buildings - Survey of Degradation of Bronze Copper Plates of Real Buildings After 80 Years", a prize of the Department of Architecture Engineering.

At the 48 th Annual Academic Lecture by the Faculty of Engineering, Nihon University, the "Study on Degradation and Dirt of Coating by Exposure Test" by Ms. Arisa Shimoda of the undergraduate 4th graduation received the excellent student presentation chapter.

At a technical seminar for professionals, Associate Professor Kaori Nagai gave a lecture on "Current status and issues of large-scale repair of high-rise apartment houses".

Associate Professor Kaori Nagai gave a lecture on "Efforts on Maintenance and Maintenance of High-Rise Buildings" at the 1st Inter-Industry Exchange Forum.

The 25th National Women's Architects Liaison Conference was held and Associate Professor Kaori Nagai greeted as a female chairperson and coordinated the panel discussion "Future life style (by female panelists in their 20s to 80s)" It was.

The 40th Materials and Construction Research Lecture Meeting was held at Nihon University College of Industrial Engineering, Building No. 39.

In collaboration with Watanabe Laboratory and Shinozaki Laboratory at the 20th R & R Exhibition (Building Revitalization Exhibition 2015), we exhibited at the Nihon University Production Engineering Department's booth and there were 200 visitors.

At the Nihon University graduation thesis review meeting in 2015, Takuya Komuro of the undergraduate 4th graduate received the cherry blossom award, alumni association and architecture engineering thesis award in "Research on the relationship between the surface structure and water contact angle", Tomoya Kano "Research on preservation and preservation of historical buildings - research on surface coating agent of brick by repetitive dry / wet" was awarded the paper on architectural engineering thesis prize.

Ms.Natsuki Kon 's work "Effective Utilization of Domestic Materials" was selected as a honorable mention by the seminar student at the building finish material technology and design competition 2014

Thank you very much for participating by many people, including the laboratory graduates and the teaching association of the academic society.

The final lecture was given by Mr. Isamu Matsui, Department of Production Engineering Dean, at Tsudanuma Campus  of 2014

n the 2014 Japanese architectural finishing society, the research by Shohei Narita of the undergraduate department and Mr. Manabu Hasegawa studied "Study on the quality of urethane coating film waterproof due to environmental difference" received the student research encouragement prize.

A paper "High Resolution Study on Water Contact Angle and Dirt of Coatings" by Mr. Takafumi Noji and Mr. Daisuke Horii of the 4th undergraduate department in the Kanto Branch of the Japanese Architectural Institute in 2014 will be published in the excellent research report collection.

At the Nihon University  Master's Thesis Board of 2014, Ms. Shunsuke Yoshida's master's thesis "Study on Oyaishi's resistance to freezing and thawing" was awarded the Kanai Prize.

"Hikaru Tile" by Yuya Araki of Seminar student was chosen as a honorable mention.

A master's thesis of Nihon University   Ms. Nomura kai's paper "A Study on the Appearance of Architectural Finishing Patterns by Light and Shadow" won the Young Excellent Research Report Award at the Kanto Branch of the Architectural Institute Did.

At the 11 th Japan-South Korea Symposium, Nomura Kai's paper "The Study on the Appearance of Finishing Patterns by Light and Shadow - The Luminance Distribution of Geometric Stereos -" was selected as the Excellent Paper Award It was.

We made Home Page

-if you have question-